Many believe that people with disabilities on Roatan have been forgotten and abandoned by Honduran society. 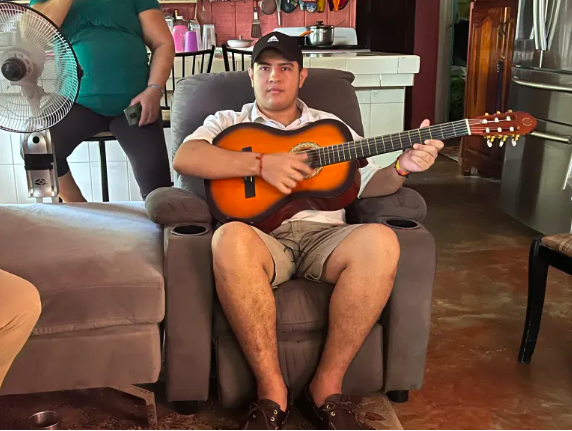 Higuero
North in the village of Higuero in the middle of the island of Roatan.

The car bumps along roads washed out by rain that has created deep ditches. Behind the wheel sits Connie Silvestri.

We stop in front of an orange house surrounded by a high green steel fence. At the gate, Jastin (19) stands with his mother. The eyes flutter. The reason is obviously those unknown people who come to his home.

The living room and kitchen are organized down to the smallest detail. The equipment in the kitchen and the decorations in the living room are duly lined up. Also thanks to Jastin who notices if something is not in the place where it should be. Structure. Predictability. Autism.

Jastin is loved but he does not have the outside support he needs related to his disability. His mother, and grandmother who lives with him, are limited in what they can do.

The mother finds a guitar and places it in his lap.

“He would like to learn to play the guitar,” she says. “Right Jastin?”

He signs off with “Si” because the young man has some signing abilities. He lets his thumb slide over the out-of-tune guitar strings repeatedly as his gaze moves from person to person in the room, confirming that playing the guitar is something he can imagine.

He wishes to be out in the community and be enrolled in a place that specializes in supporting people with autism in reaching their maximum potential.

After being in countries and cultures where people with disabilities are often only in the way and a nuisance, I am amazed at how much love lives here.

French Harbour
“Was this a French port?” I ask out of pure interest.

“No, a Frenchman lived here a long time ago, hence the name,” replies Connie, who grew up here.

Then I figure it out. Because it was formerly called “Frenchman Harbour”.

We stop and wander into narrow back streets. A sewing machinist inside an opening in the wall turns the screwdriver on his old “Singer” sewing machine. He explains that he sews cushions for chairs and sofas.

Just below the sewing machinist, we find the fast food restaurant “Comedor Lidia” and young Jorge, a cheerful boy who appreciates visitors. Here he is with his parents who run the kitchen. On the counter, he has his notebook where he writes numbers and some letters. He is obviously eager to show his skills. When we ask if it might be a good idea for Jorge to be enrolled at a day training center, the response from the parents is immediate. “Yes, it will be good for him!” Jorge wants to learn more academics and he has had very little opportunity to do so. His parents need for Jorge to learn more skills to allow him to work one day. They want him to be able to learn and increase his skills in a safe environment. 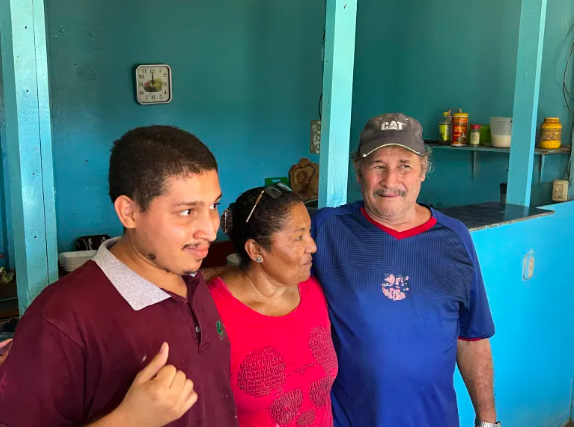 Jorge with his parents outside Comedor Lidia (Photo: Roger Bjoroy-Karlsen)

On the north side of French Harbour, near the Cattleya school center, Lupe lives with her mother Reina.
“She’s still sleeping. Can you come back later?”

Reina lets her daughter Lupe, short for Guadalupe, sleep. We take a detour and lunch before returning to the small apartment she has made on the lower floor of the big house. The rest is rented out. It is their only income.

Lupe has no language, only a few simple words.

“If Lupe screams, it’s all right,” Connie tells us. I’m glad she’s warning us. She has a son with Downs syndrome and is one of the founders of the learning center Cattleya, which educates children with disabilities. But the offer for teenagers and adults is absolutely absent. Something Connie wants to do something about.

Lupe is apparently happy about the visit, but still a little unsure.

The mother says that Lupe goes and gets the clothes she has worn that day from the laundry basket and puts them next to her in bed when she goes to sleep.

“This is about safety,” says Shelly Trevino, who has joined us on the trip. She is an expert on people with disabilities with a lot of experience in training and educating.

The mother Reina further says that the story she has to tell at the bedside every night is the same. It is from the Bible and is about St Stefanus (St Stephen) who was stoned to death for his faith in God.

The immediate response is why it is about the same thing. To repeatedly return to the familiar. A story she knows. Why it is exactly this brutal story, is difficult to say.

Lupe doesn’t scream this time. She seems satisfied with the visit. A break from the monotonous everyday life, I think in my quiet mind. Lupe’s Mother explains that Lupe needs to be exposed to the community to learn social skills. Lupe is totally dependent on her mother for all areas of daily living and self help skills. Her mother desperately wants Lupe to be trained to do more for herself. 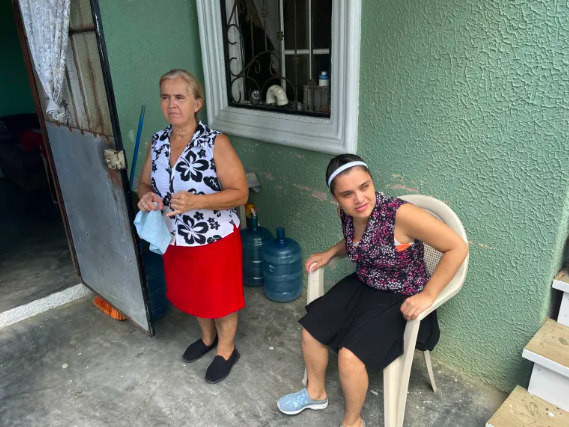 Lupe (to the right) with her mother Reina (Photo: Roger Bjoroy-Karlsen)

Los Fuertes
Whether it is a village is not easy to say. But there are clusters of houses over several hills, with numerous shops and stalls along the roads. We are on the first hill, down a slope. Through a gate in a fence where both the gate and the fence are hanging loose. The roof over the outdoor area is rusty and is partly coming down. Dogs put all their energy into barking at us, as loud as possible from behind the fence in the innermost part of the yard.

Walda meets us. She is in her early teens. She has this week off from school and has spent the holiday with her cousin Zahid (16), to help look after him. Zahid’s mother Sonia has recently got a job and is absent for the moment. His Mother can only work when she has someone to look after Zahid.

He has a severely impaired mental capacity. He is sitting on the stairs when we arrive and backs uncertainly into the living room at the back. When I try to enter the room, he screams in fear. I realize it has something to do with me. And I can’t calm the mood by finding the warmest smile I have.

“Is it because I’m a big person?” I state tentatively.

“There are many people with reduced mental functioning who struggle with men,” answers Angela Claire.

I hope for the longest time that it is so. That the boy has not been mistreated or bullied by men.

He ends up in the innermost part of the room in a chair, and the nurse Xiomara manages to calm him down. He has little if any activities to stimulate his mind. He is missing key training to enable him to be more independent. His cousin explains that he needs care so that his mother can work. She states he needs someone who can teach him. Shelly Trevino discusses options for him in an adult day program. 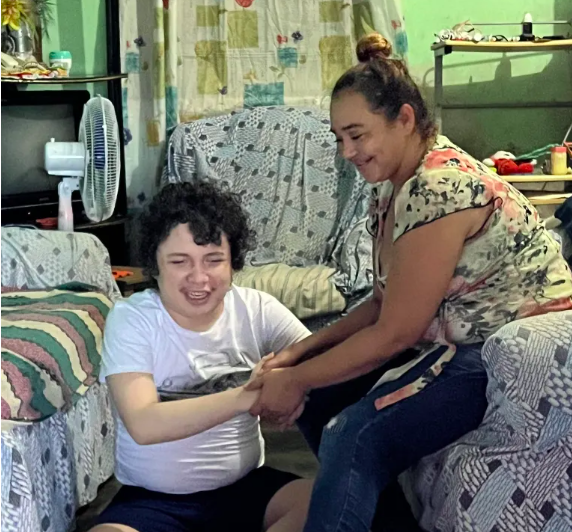 Sandy Bay
Known for its beaches and properties for expats living in good company with locals. Just up in the countryside south of the main road, we find Doris with a small child on her arm outside an orange house with white pillars. She is also the mother of Nichole, commonly called Nikki. She has cerebral palsy and epilepsy. Her brain is apparently crystal clear, but her disability hampers her. But she had been active as a teaching assistant for a few months before Covid smashed it all. And she looks after her little brother when necessary. 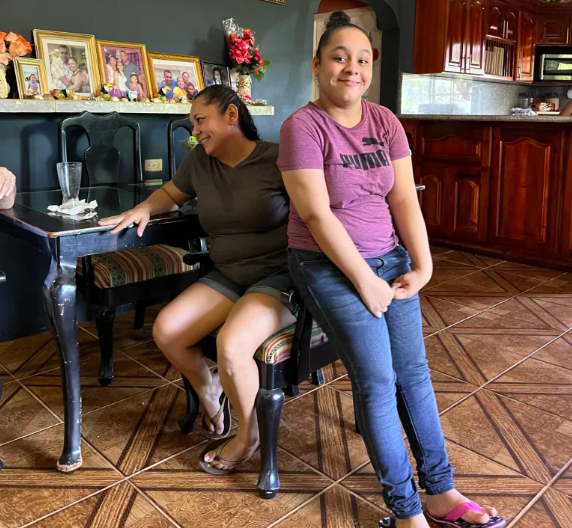 Shelly Trevino visited Roatan several years ago and found that there was no care, education or training for the grown-up persons with disabilities, beyond what happened in the home. The only option for those who did not have families was to be sent to an institution on the Honduran mainland. She promised herself that one day she would return and do something about it. 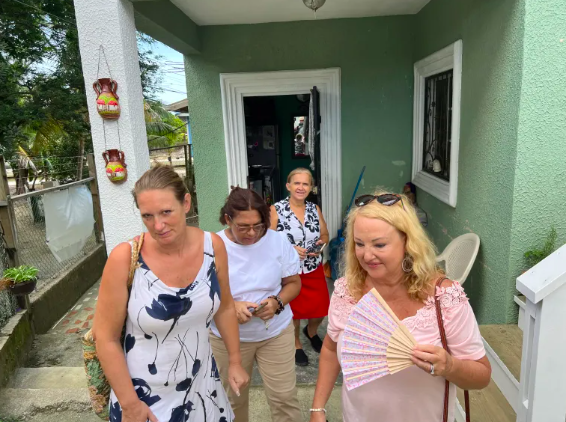 Angela Claire, Connie and Shelly are joining forces in order to create a better world for the disabled on Roatan. (Photo: Roger Bjoroy-Karlsen)

“I want to start up an Adult Training Center on the island.” Shelly is returning in January 2023 to work with people in the community and educate businesses on the needs of persons with disabilities. She hopes to make Roatan her full time home. Her personal mission is to develop and start a state-of-the-art program to enhance not only persons with disabilities but the communities they live in.

Her fundraising is ongoing, partnering with Cattleya and she hopes that people will support this operation in order to give the disabled community a better quality of life.

Please contribute to Cattleya and make your contribution to Shelly Trevino Adult Programs.

More about training of the disabled here: